It’s been more than 130 years since France made July 14 its national holiday!

It is an opportunity for all the French people, and for foreign visitors to enjoy a large popular gathering around numerous official and festive events,… This holiday is one of the symbols of France, just like La Marseillaise or the blue-white-red flag. Let’s see how we celebrate the national holiday in France and what are the events to celebrate this occasion, everywhere in the country.

Why is the French National Day celebrated on July 14?

Each country has its own history and its symbolic date to celebrate it. France chose July 14 in commemoration of 2 successive events of the 18th century. In France, we first celebrate the storming of the Bastille (prison symbol of absolute power) in 1789, a popular insurrection interpreted as “the awakening of freedom” by Victor Hugo. Then, July 14, 1790 is also the feast of the National Federation, the day when King Louis XVI made the promise to the people to respect the Constitution. In short, these two dates mark the adherence of the French Republic to Human Rights. The three ideas of the Republic represented on the tricolor flag took on meaning that day: liberty, equality and fraternity. 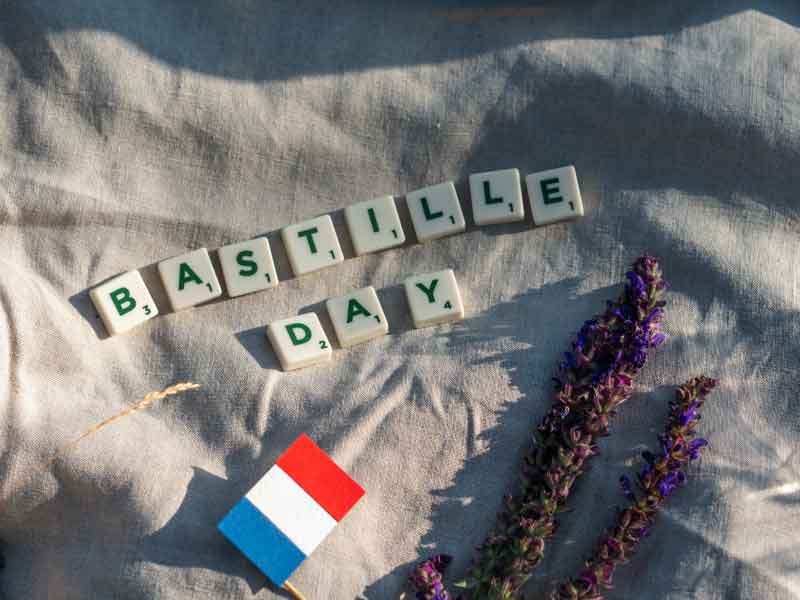 How to celebrate July 14 in Paris: the unmissable events!

Attend the military parade on the Avenue des Champs-Elysées 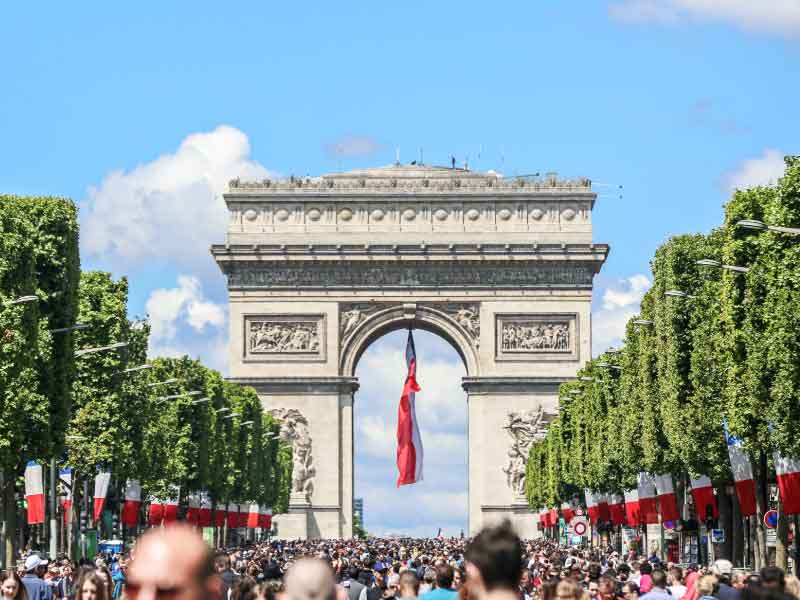 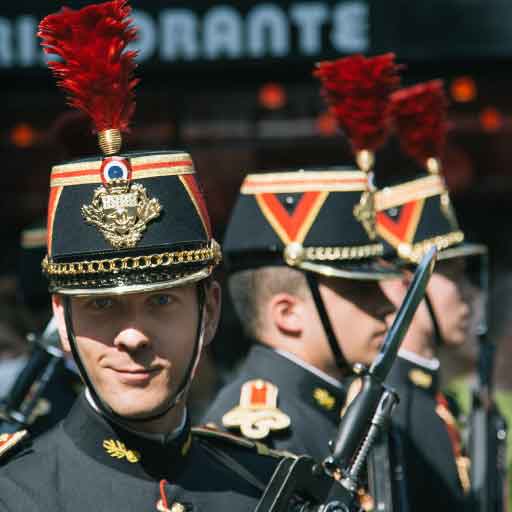 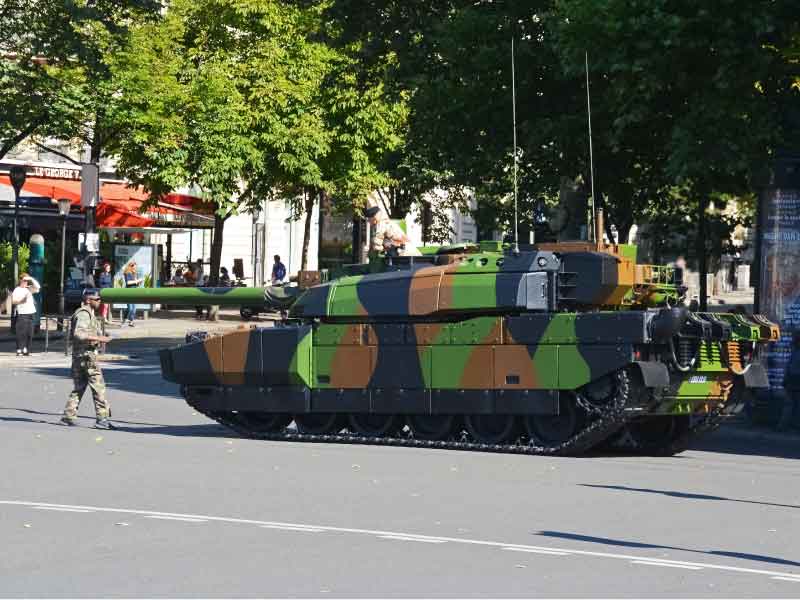 July 14 is always a great success and attracts crowds, both French and foreign. Visiting Paris at this time, is an opportunity to experience a unique moment in the year: the traditional military parade on the Champs-Elysées. This is the oldest and largest military parade in Europe! After careful preparation, on the morning of July 14 in Paris, the spectacular military parade brings together up to 4,000 soldiers and civilians on foot, as well as hundreds of horsemen, vehicles and aircraft. The event ends with a demonstration of the patrol of France, always impressive. For more than a century, this parade, both solemn and popular, has taken place on the Champs-Elysées so that every citizen can attend it freely.

So welcome to foreign travelers and learners of French who want to fully experience the French National Day in Paris! 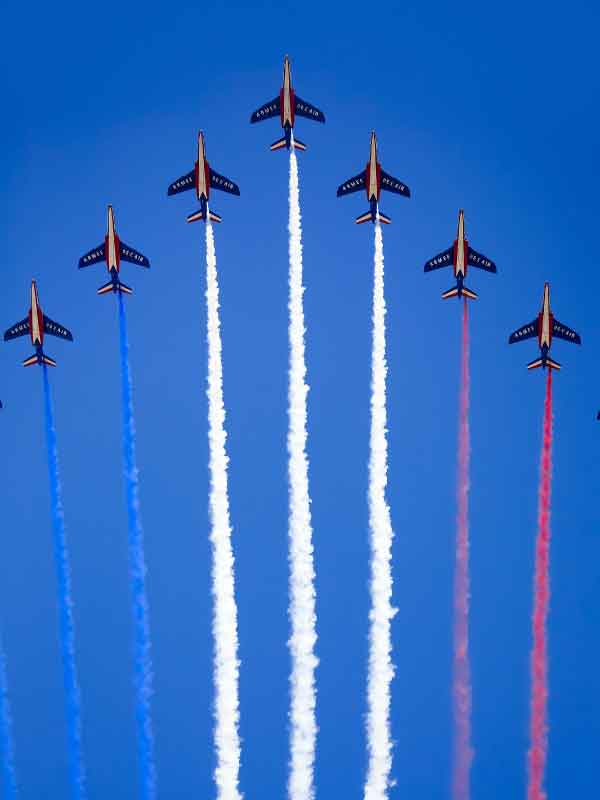 Take advantage of free entry to some cultural spaces 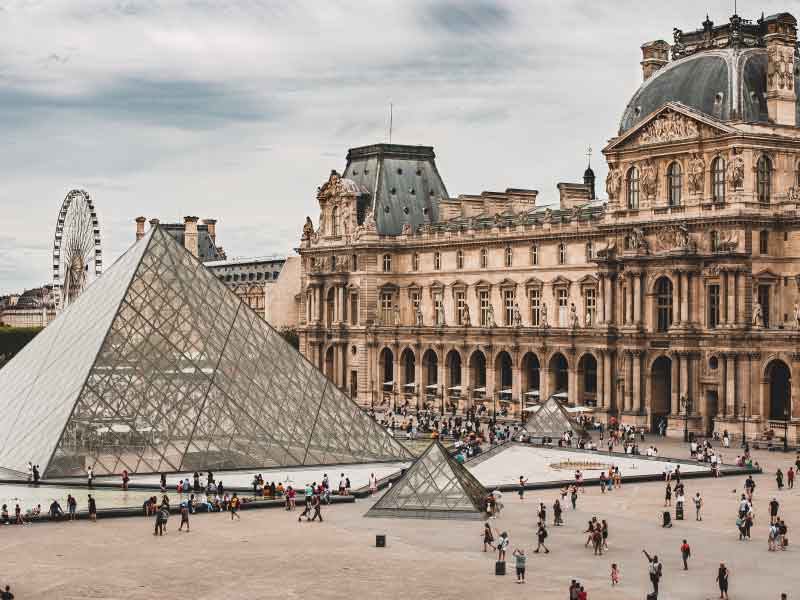 For July 14, strolling around Paris is a good idea! Because many cultural spaces and museums are open to the public and free of charge. It’s time to mingle with the French who take advantage of this holiday and free admission to visit museums and exhibitions… For example, you can take a tour to the Louvre, which opens its doors free of charge to all public that day, or even to the Grévin Museum, to the Invalides, … and why not keep cool by visiting the Catacombs even without a penny in your pocket!

The operation is also set up in other cities, which decide to give free entry to their visitors for this great national holiday. It is therefore necessary to find out about the opportunities in each city.

Listen to the great concert at the Eiffel Tower

After a visit to the museum, head to the Champs de Mars, at the foot of the Eiffel Tower. This is where a big popular concert will be held. It brings together French and international singers and groups! It’s time to plan a picnic and reserve your place at the foot of the Grand Dame de Fer. 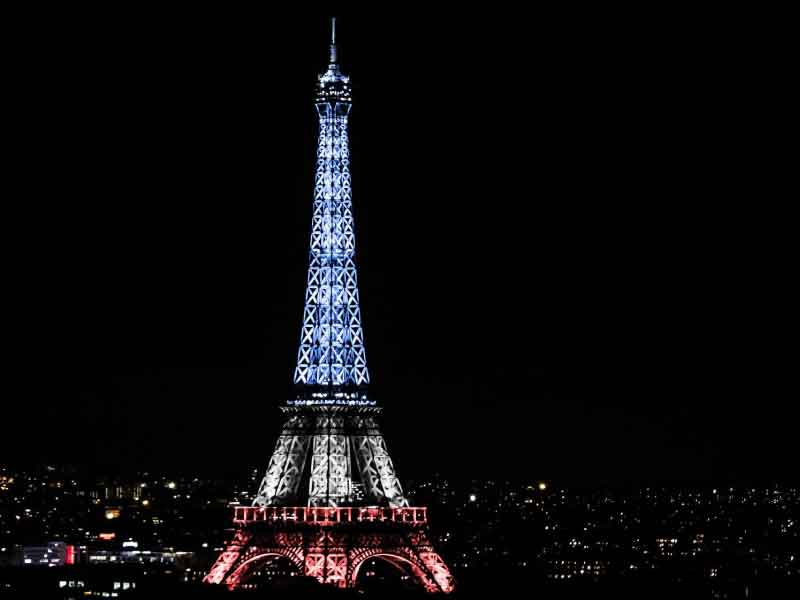 Admire the fireworks at 11pm

Don’t move from your seat because after the concert, you can watch the long-awaited July 14 fireworks. From the Jardins du Trocadéro and the Eiffel Tower, a spectacular fireworks display is fired before the astonished eyes of all the spectators. Always magical, innovative, it tells a new story every year in colour, sound and light. A must to celebrate July 14 in Paris.

Our stay offer in Paris 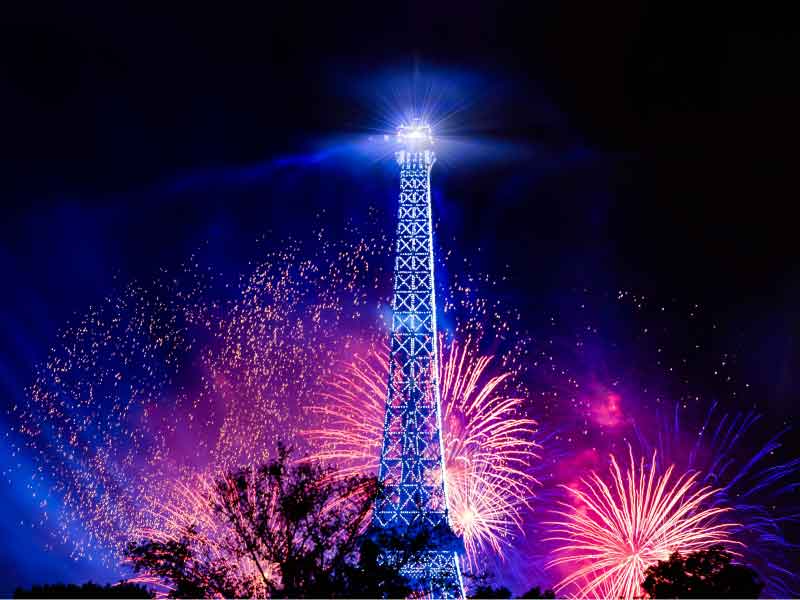 How to celebrate July 14 in French cities?

Everywhere in France, July 14 is actively celebrated! In every town and village in France, fireworks, parades and popular balls are always guaranteed as a rule.

In the wine capital, the national holiday is celebrated on the banks of the Garonne. Bordeaux residents gather on the right and left banks, between the historic Pont de Pierre and the modern Pont Chaban Delmas, to admire a fireworks display from the river. Accompanied by sound and light, the magic operates thanks to the splendid colours of the sky which are reflected in the water of the Garonne. In 2022, Bordeaux celebrates July 14 with a huge popular picnic on the banks of the Garonne, followed by a surprise event to mark the 200th anniversary of the Pont de Pierre, a historic monument built by order of Napoleon Bonaparte.

Our offer of stay in Bordeaux 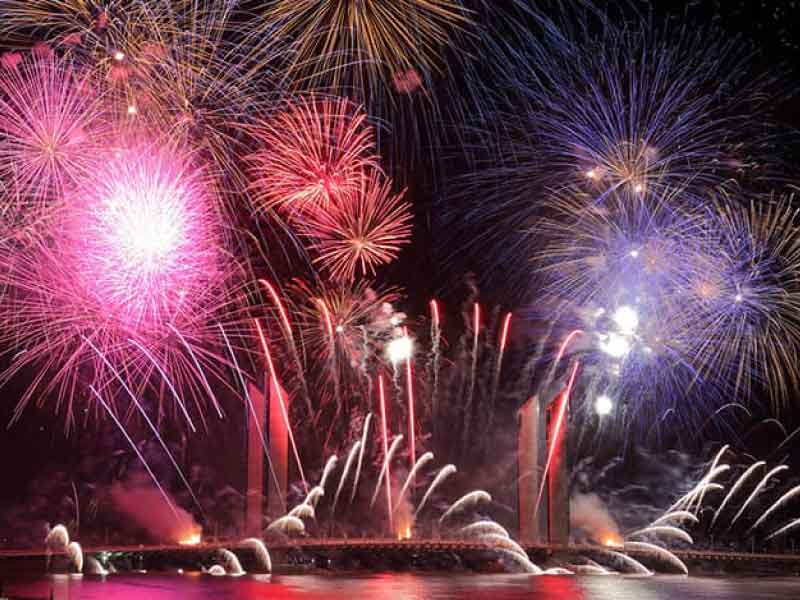 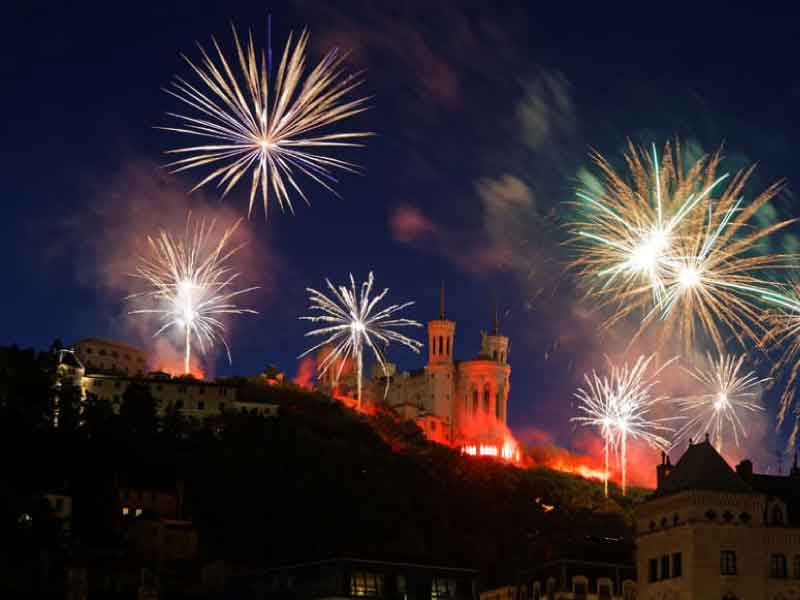 Lyons inhabitants are not left out when it comes to celebrating and offering entertainment to locals and passing visitors. Lyons also presents a morning military parade organized on the heights of the city, as well as various lively popular balls on the banks of the Saône and the Rhône.

The big show starts in the evening with a high-rise fireworks display from the Colline de Fourvière. An unparalleled and dazzling pyrotechnic show, which blends with the illuminations of the monument overlooking the city. Something to amaze young and old! It’s up to you to find the best spot to admire the fireworks!

Our stay offer in Lyon

Start the national holiday in Marseilles with the military parade, accompanied by traditional serenades! The highlight of the celebrations is obviously the famous fireworks display from the Old Port. Tens of thousands of people gather in the streets and on the forecourt of this emblematic place of the Phocaean City, to admire the pyrotechnic show. The rockets, launched from various pontoons, are reflected in the water of the port with a mirror effect of great beauty. A vibrant moment, out of time to live according to the clanking of the masts of the boats moored in the Old Port.

Our stay offer in Marseille 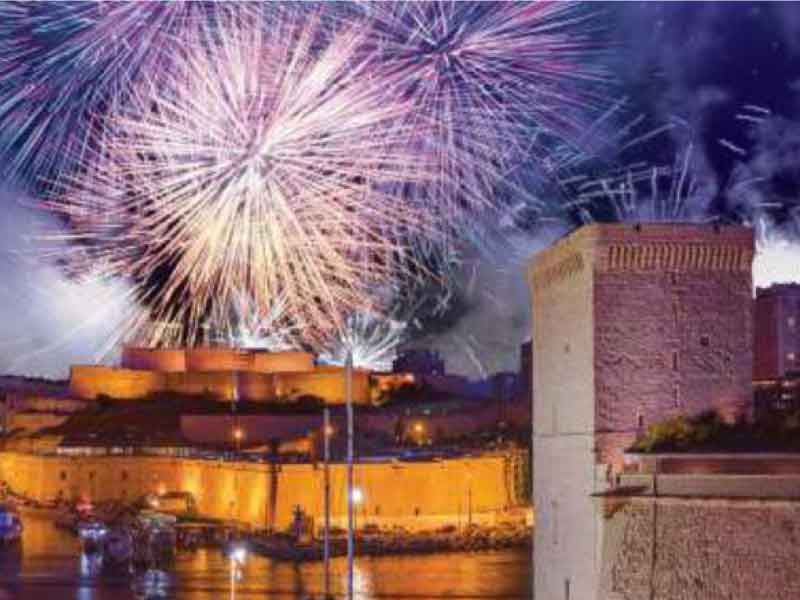 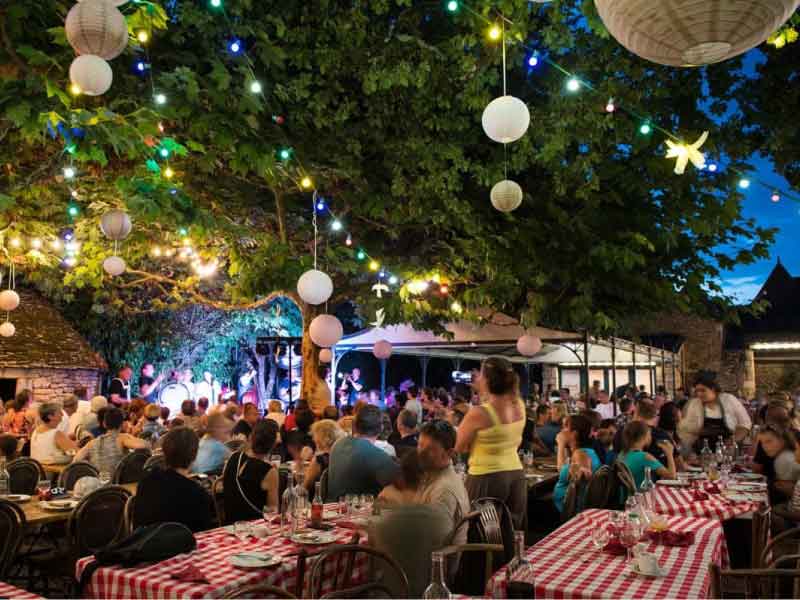 The National Day in the villages

Everywhere in France, the National Day is celebrated, including in the small villages. Wherever you are to visit the country, in town or in the countryside, festivities take place to mark this event of national fervour. There will therefore be a popular ball and fireworks to discover but beware! Most villages organize their celebrations on July 13, to let the population admire the big events of the major cities the next day, D-Day.

How to enjoy 100% of your holidays in France for July 14? Trust Vacances Actives to organize your stay and offer you the best visits and activities to celebrate the National Day in France in the best conditions!

Want to visit France while taking advantage of the country’s major popular events? The Braderie de Lille is an opportunity not to be missed!...
Read More

Vacances Actives Linguistiques proposes you to spend a “royal” day with a first stop at the medieval castle of Blandy-Les -Tours, then at the...
Read More

“I am delighted, Giverny is a splendid countryside for me. “ Painting lovers, nature lovers, city dwellers in need of the countryside, we offer you...
Read More